The other day I had a conversation with someone whom I’ve always liked. We got to talking about my recent trip with my 14-year-old daughter. I explained our family’s tradition of offering our children a trip anywhere they’d like when they get to the place where they are between “childhood” and “adulthood.” I shared my observation, made independent of any corroboration, of my daughter acting both “childlike” and “adult-like” while we were away in Greece, citing a trip to the beach where she both skipped stones—looking quite childlike, and how she insisted that I take photos of her in her tiny white bikini—looking rather like an adult.

This someone’s initial reaction was to cringe, as if the idea of a 14-year-old in a bikini snapshot made him uncomfortable. He then took a moment to “reset” and explained that he’s “all for” a girl to “have it all going on” and that he will be “all right” with this sort of behavior when his now-pre-pubescent daughter gets to the “right age,” which he said would be “you know like forty-two, forty-three.”

I didn’t know what to say, though “Are you fucking kidding me?” crossed my mind.

I waited for a “just kidding.” I hoped for a “you know I’m only joking.” When no backpedaling came, I excused myself to the other room.

As I stepped away I couldn’t help but feel a level of dismay, bordering on anger, over the reality of an adult man letting an adult woman know that he would only be willing to relinquish dominion and control over his daughter’s sexuality when she gets past her 42nd—maybe 43rd—birthday.

For those of you who think that my conclusion is hyperbolic, I offer you these imagesm found (and ranked in order) on a Google search under “date my daughter meme” images:

(Implication being that the dad is as aware of his daughter’s irresistibility as the boyfriend, like the two of them are “in” on something.) 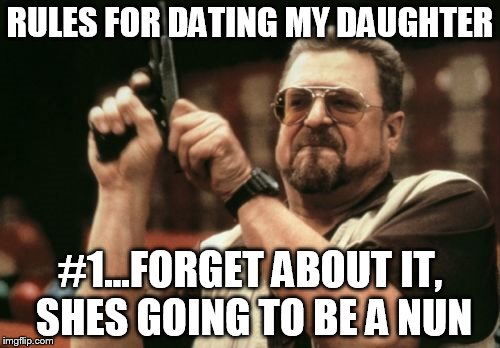 To be fair, when entering “date my son meme” into Google images, these came up: 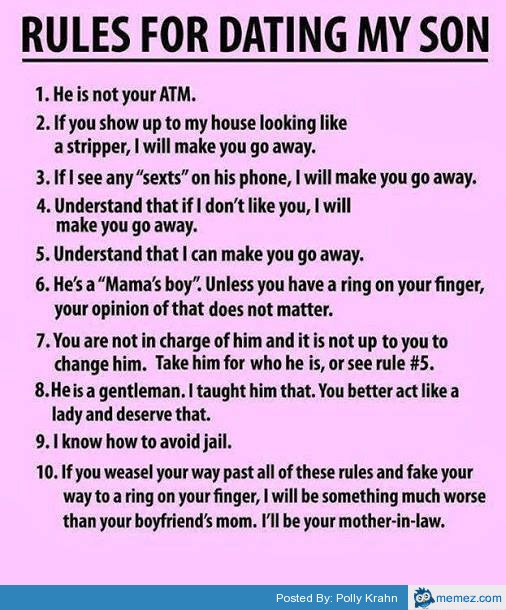 The first meme that that comes up which is not variation of the “list of rules” is this racist meme:

So in 2017 America, this is the culture we live in. Here in the United States, men and women, formerly boys and girls, are legally endowed with the same civil rights.

In practice, we all know that there is not true “equality” between the sexes. I can’t but help to think that the images and messages that we give our children, as they go from childhood to adulthood, have profound meaning.

Take a minute to think about the collection above. With respect to the “date my daughter” images, these endorse the idea of the father enforcing, under the threat of violence and/or death, that his daughter’s vagina is his. Perhaps forever.

Looking at the “date my son” images, these illustrate the concern the mother has about the hyper-sexuality of her son’s potential girlfriend. No guns, no claims made by the mother that her son is going to be a monk or that she’ll shoot and/or kill him.

If this double standard bothers you, talk to your teenagers about sexuality in an open and honest way. Remind them that they are in charge of their bodies and minds and or them to respect the bodies and minds of those they might date and/or have sex with. Don’t threaten their love interests with violence or shaming.

Even if you think that it’s “just for fun.”

In fact, if you’re someone who finds these sorts of memes amusing, I ask, “Are you fucking kidding me?”

6 thoughts on “Girls are Still Dealing with This”