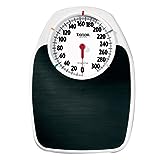 I start my morning with a number: the number I see on the bathroom scale. I have been doing this since middle school — maybe even late elementary school.

The result, usually read under the illumination of a night light, determines in no small part what sort of day awaits me. If it the reading is below a certain number, I’d feel ready to conquer the tasks ahead of me with vigor and a sense of grace thanks to my (perceived) lithe frame; but if the reading is north of my expectation, the day would begin on a depressed and defeated note.

Over the years, the number has shifted. My age, activity level, diet choices, and forays in and out of pregnancy have all affected whether I add or subtract pounds from my “goal weight.” Admittedly, for ninety-nine percent my self-esteem-questioning life, I have been unable to “achieve” that which I have convinced myself is “right.” The one percent was short-lived and uniquely memorable.

It’s pathetic and I have bought into for years — decades. And I’ve gotten on my scale every day. If nothing else, the habit renews my membership in the “not-good-enough” club.

But then something changed. Over the last few years, I began to feel strong in my body. I began to see contours of muscles and sense a control over my flexibility and balance. I, of course, concluded that these were the result of years of practicing yoga.

But just recently, I came to a shocking realization: it wasn’t yoga that made me strong and flexible and well-balanced; it was my own body.

My practice doesn’t use blocks or straps; my practice has never relied upon hand weights or heavy equipment. My practice — the activity which has lead me to trust and respect my long-disdained body — is nothing more than me and my mat.

So now — and only recently — when I regard my body in the mirror, I do so knowing that it is a creation of my own singular work. The number is still there every day, staring up at me from the space between my toes, but it has less of an effect.

Now, this doesn’t mean I don’t have a goal number. I do, but it is a guess. Because now instead of arbitrarily assigning a number to my weight, I am assigning a pose.

I will never be able to get into this pose unless I lose weight. Ever.

I am flexible and strong. My arms are plenty long enough. However, I can’t to it with — what I estimate to be — eight extra pounds.

So, I will continue to jump up on the scale every morning but not to solidify in my mind a hateful — and by objective observations, perhaps the ridiculous — conclusion for being too heavy. It’s now a game. I get on the scale to see, as I slowly shed those eight pounds, if I was right.

Did I guess right?

Will the loss of eight pounds get me to Baddha Padmasana?

And I’ve decided that when I do, I’m going to be done with my scale.

Oh and I’m going to miss my Health-O-Meter despite my love-hate relationship with it.  It’ll be a hard habit to break, though I imagine a sledgehammer will help.

5 thoughts on “The Daily Numbers Game”