This morning I awoke to a curse on my day. It wasn’t some happenstance misfortune. It wasn’t a surprise. The curse was planned, outlined, and executed with precision.

I will be spending my day with a special song in my head thanks to my dear, sweet husband who in the late–and unsupervised–small hours of the night, thought it humorous to leave me a note which upon reading–and thereafter upon his own admission–was nothing more than an earworm.

First off, it’s not the nicest image: ear + worm.

I think I saw a movie once (Star Trek?) that had some blood-letting, leg-less creature enter into people’s ears causing pain and maybe amnesia. (The fact that I cannot remember makes me wonder if this memory-stealing worm is more than just a character in science fiction.)

Then there’s the earwig.

When you learn that it’s not a small toupee for your pinna, aka, the outer ear, you wish you hadn’t. They are perfectly harmless to people apart from causing fear after dark when they become active and you want to sleep but are frightened of the coming earwig attack.

An earworm, for those unfamiliar with the word–as I was until just a couple of years ago–is nothing more than a song stuck in your head, playing away on a repeating loop, and making you wish for a quick and effective method for ridding yourself of it.

I have read that there are two ways to banish an unwanted earworm:

As I have a mouth full of thirty-year-old fillings, I can’t chew gum. So instead, I’ll share with you, word for word, what Rob wrote on my morning note card. (You may wish to stop reading now if you are not one for Greatest Hits, Sunday School Edition. If you keep reading, you do so at your own peril/enjoyment.) 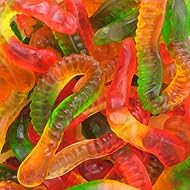 Children of the Lord.

Isn’t he the greatest for cursing me with that little ditty?

(You’re probably thinking the same thing of me, but you were warned and I even put the clip art gummy worms after the warning as further protection from seeing the lyrics. Don’t blame me, Curious George.)

All right, to be fair, it’s your turn:

Apart from the one in your head right now, what other earworms have inhabited your brain? Let’s pass these around like a bad case of conjuctivitis. (And be glad I paased on clip art for that. You’re welcome.)

11 thoughts on “The Worm that Keeps on Singing”