Three years ago, I traveled to Florida to be with my mother because she was having “a procedure.” The oncologists and surgeons can dress it up in euphemistic language all they want. Their linguistic hair-splitting didn’t change the fact that my then sixty-five-year-old only living parent was having cancerous cells cut out of her left breast–a lot of them. So many of them that the surgeon announced, as my mother lied in the “recovery” room (another sterilized term), that he was able to get good “margins.” (That’s surgeon-speak for “I cut out the cancerous tumor which was surrounded by enough non-cancerous tissue that the cancer is now gone.”)

Well, that surgeon was wrong. The margins weren’t so good. In fact, they were no good at all.

Options: oral chemotherapy or another “procedure.”

She opted for the former though it has not been easy. That stuff has made her sick. Unable to sleep, unable to eat, unable to feel much equilibrium within her own skin. It’s not surprising: any “therapy” which affects something as powerful as the distribution and absorption of estrogen is likely going to have significant side effects.

In the last three years, I’ve been to mid-state Florida a lot. Some times with a child or two, usually alone. I’m here now. My oldest is asleep in the room across from where I am writing; my youngest in the king-size bed I left a short while ago. We leave later today.

In the last three years, I can’t help but think even in the deep recesses of my mind as I say “good-bye,” that this might be the last time I see her. Alive.

It’s unlikely that this is the case. The cancer she has, though initially labeled “rare and aggressive,” seems to be keeping quiet under the daily barrage of the oral dose of anti-cancer medicine. But there’s that residual fear. She’s now sixty-eight and any number of things could happen.

I’m not going to live forever, you know, she’s said over the years.

Often that statement has been offered as the explanation for going on a special overseas trip or having an especially decadent after-dinner dessert. She doesn’t say those words anymore around me, but I can still hear them.

At what age will I start saying those words? When should I begin speaking them aloud to prepare my own children for the thought that I won’t live forever? When should I take the theoretical and ask that it be considered through the lens of practicality?

I think many of us wait until the generation before us has died to grapple with our own mortality. There is, however, a handful of us who think about it all the time: A philosophical (read: worried) collection of folks who struggle with the idea that this existence we are living is impermanent and soon to end.

While “soon” is relative, we never quite know when “soon” will come.

And if we all lived in the state of wonder (read: fear) of the unknown and unreliable tomorrow, would our good-byes to each other be different? Would our thank-yous to the people who pump our gas and bag our groceries be more heartfelt? Have more eye contact? Would our efforts to get our children to sleep at night be tempered with more patience? Would they close their eyes feeling loved rather than burdensome?

Could our lives take on a different dimension with the constant awareness (read: dread) of not being here and living the only life we have?

I think yes. But the awareness of the “end” to one’s uniqueness can be debilitating. A constant mediation on one’s own death brings with it trepidation, agitation, even panic. Or . . . one can try to pick around the negative and glean an appreciation for the right here and right now.

And . . . if every time we say “good-bye,” we do so in the reality that it is “I” who may never be seen again, we might each be instilled with the motivations of kindness and generosity and appreciation for the change to have said that one, potential, last “good-bye.” 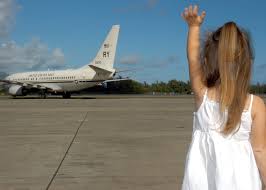 4 thoughts on “What It Means to Say Good-Bye”