Some people have the skill to look at an issue, parse out the troubling pieces, and identify what’s causing the problem. While I think the ability to do this well is learned, the basic foundation rests on the rules of logic and perception–two things that I presume most people have within their grasp.

Over the last few days, I have been, for lack of a better word, “battling” back and forth over an issue where the people on the “other side” seemingly refuse to engage in the discussion assuming the same set of facts from which I am framing the issue. Despite multiple attempts to clarify and define the matter, they continue to come back to the conversation with “distractors” which do nothing to bring the matter to a reasonable conclusion.

I have felt like we are standing looking at a burning building. While I have been focusing on the flames, they prefer to make comments about the color of the house paint and the length of the grass in the front yard. 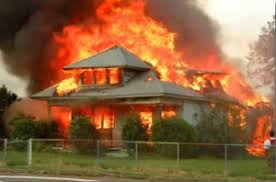 My frustration stems from repeatedly stressing the importance of extinguishing the fire in the face of their comments that center on unimportant details which have nothing to do with the conflagration.

And now, I’m left in the wake of it all, watching the last wisps of smoke rising off of the charred timbers and blistered paint.

I am saddened by the scene. I wonder whether there might have been a better way for me to have controlled the spread of the fire. I wonder how I could have done a better job in expressing the essential nature of the progression of the flames. I’ve reread my participation in the discussion and cannot see how I could have approached it in a more thoughtful way.

In the end, I’m left with the unsatisfactory feeling that one should never invite a couple of pyromaniacs to a house fire and have begun to question whether they were arsonist all along.

4 thoughts on “Confrontation at its Worst”