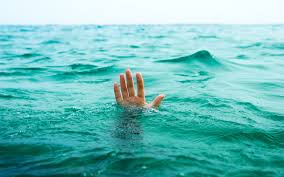 The thought of drowning frightens me in a way that mirrors the way some others regard the idea of being around spiders or mice or snakes. Just the thought of it makes my heart rate tick up and my breathing change. When my kids were young, I routinely would dream of losing them to the ocean, or a lake, or even the bathtub. Believe me, for years I was no fun to sit next to at the beach as I spent the whole time counting 1-2-3-4, 1-2-3-4. There was no relaxation for me on those ostensibly “lazy summer afternoons;” it was nothing but high blood pressure, bordering on a seizure.

You’d think with this sort of fear that I’d become a fantastic swimmer and “power over” the phobia. Nope. That would take way too much practice that would necessarily require me to be in the water and . . . (wait for it) . . . I could drown. If we human mammals were meant to be swimmers, like whales and seals, we would have been equipped with blowholes and nostrils which naturally close when going under. A simple assessment of our biological structure is enough to convince me we shouldn’t press our luck near H2O.

A few years ago, I read an article about how drowning itself is not painful. I didn’t believe this. So I went looking for the opposite hypothesis. Well, I quickly found a lot of other anecdotal accounts of it being a terrifying way to go, the worst. I’ve decided to let confirmation bias rule on this: One should be afraid of drowning because not only is it a rational thing to fear (as compared to a daddy-long-legs, a field mouse, or a garter snake), it could happen were one to be put into that situation–by “situation” I mean any body of water, including a five-gallon bucket with a couple of inches at the bottom. (The warning on the side clearly shows a small child falling in, head first, and coming up dead.)

Now don’t get me wrong: I learned how to swim when I was young. My four children all were required (by me) to take lessons. If someone dropped me in the middle of Walden Pond, I could make it to the shore. Physically, I think I have the strength and coordination to not die by drowning, but I just don’t see the need to ever put this theory to a test, especially because said test would involve swimming and . . . (wait for it) . . . I could drown.

Objectively, I may be regarded by others as someone who can “do it all by herself.” As for swimming– and not drowning, if I absolutely had to, I suppose I could save my own skin. It would be arduous and anxiety provoking. No sense of accomplishment would result; only a thin sense of relief that it was over.

So despite having the knowledge and capacity, I would rather have a boat or flutterboard. To get from the center of a lake to the shore, I’d want some help: something to make the way easier.

The desire for assistance is not exclusive to “life and potentially deadly situations.” We all could use the help of others, yet so few of us ask. This might be specific to our up-by-the-bootstraps cultural or rooted in rugged independence. But to what end? Why not ask for help? If you’re inclined to say, “Because I can do it all by myself.” I’d parry with, “Why go it alone if I’m here to help you?”

8 thoughts on “Asking for Help”