Several months ago I entered a slew of writing contests. A slew equaling fifteen.

Over the course of the last month or so the results have been rolling in. And guess what? I have received six “no, thank yous”–some more polite than others, i.e., detailed enough to make me think that what I submitted was actually read.

One contest was particularly interesting as I received feedback from two judges: one loved it; one thought it was not very good. I found it curious that their specific feedback, e.g., effectiveness in “hooking” the reader into the story, was at opposite ends of the spectrum.

This leads me to the only sensible conclusion possible: tastes differ. A conclusion that is of absolutely no help to me. Judge A loved what I wrote; Judge B hated it. Gee thanks for nothing, Esteemed Judges.

Science, math, law, statistics, and medicine are all objective disciplines. There are clear conclusions to be drawn–supported by observable evidence–to guide how those bodies of knowledge and practice function.

But all that which is created from the “other side” of the brain? No such reliable results.

What to do when the feedback from others–on the exact same creative endeavor–goes in two opposite directions? 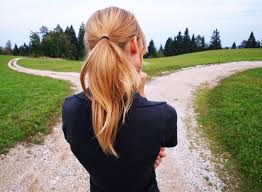 Thankfully, we have the benefit of personal daily training.

(Side note: Of the above five scenarios, I can put checks next to four of choices which sit to the left of the “vs.“)

According to Robert Frost, the poet who suggested that choosing “The Road Not Taken” over the other has “made all the difference” was not endorsing the narrator’s “good” choice in selecting the road “less traveled by,” but rather reflecting–“with a sigh”–on the regret felt for being “one traveler” left to wonder what he missed on the road “not traveled.”

That poem is about regret, which in my opinion, is the most painful of all human emotions. I hate to be the one to tell you this, but it’s true. “The Road Not Taken” is one of the most recognized poems, and it is also perhaps the most misinterpreted.

Reading the divergent feedback from Judge A and Judge B leaves me looking at those two roads veering off in opposite directions. As much as I want to “please everyone” by making all the changes suggested, I can’t. If Judge A loved it and Judge B hated it, I simply cannot please them both. This means that I have to choose. Keep it as is, thereby pleasing Judge A, or change it, thereby pleasing Judge B.

No, not so simple. It’s easier to leave it “as is” and tell myself that Judge A is the “better” judge. But now that I have Judge B’s feedback, I’m stuck knowing that there’s that “other road.” My failure to take that one could be the greatest mistake of my writing life, maybe of my entire life.

(I know a bit melodramatic, but read “The Road Not Taken” a few times and let it settle on your mind as a cautionary tale about choice and regret and you’ll be able to better sympathize with my plight.)

The very first book I wrote was, thematically, about regret. If it is ever published, this quote by Friedrich Nietzche is the quote I want at the very beginning of the book:

“Is life not a hundred times too short for us to stifle ourselves?”

How’s that for an indictment on a life led without taking risks and opening up the retrospective possibility of feeling regretful? Scathing, but true in its existential observations, which as an aside, are never objective.

Well just pick one already, but be prepared to look back on the road not taken with some degree of regret. The only solace that can be gleaned, by having the knowledge of the existence of two roads, is not letting that regret resonate. Don’t let it take hold in a way which hinders your choice. Instead allow it to give you the strength and courage to say “No thank you” to that calling pint of Ben and Jerry’s.

7 thoughts on “Two Roads Diverged. (Spoiler Alert: It’s Not What You Thought)”