Everywhere I look, someone wants me to know the “secret” in going from “writer” to “author.” Blogs and websites abound online with “must read” content; books and magazines take up shelf after shelf with “essential tips to take your writing to the next level.” It’s overwhelming and generally not very helpful in its enormity. Seeing all the advice out there for writers reminds me of the never ending tips and tricks perpetrated by the diet industry. I’ve come to my own–and strikingly similar–conclusions relative to both writing and dieting: Be Patient. Be thoughtful. Be realistic.

While people do get published (in book form) after self-publishing (in electronic form) and people do lose dozens of pounds eating high calorie foods so long as they make sure they’ve ingested enough papaya enzymes, these “success stories” are outliers.

Frankly, I know I’ve got a better chance of winning the lottery than I do either of being picked up by a publishing house after self-publishing or shedding copious amounts of weight by popping a pill.

I ignore the quick-fix tips and tricks for both writing and dieting. I know there is no magic bullet with either. Both take discipline and dedication. If nothing else, five years of near-daily yoga practice has taught me that change comes slowly. Every challenge met along the way reveals just another hurdle up ahead.

It has taken years and thousands of chaturangas for me to see definition in my upper arms. 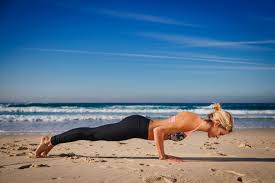 *not me.  (Side note: it’s nearly impossible to practice yoga in sand, though it’s nice for photos.)

Being able to to see my triceps today reminds me that it will take time before I see a book with my name on it for sale at my local bookstore, though I am confident (most of the time) that it’ll happen. (Don’t dare me to do yoga push-ups to prove it.)

In addition to ignoring the “tricks of getting published,” I also don’t agree with much of what I read about the craft of writing itself.

“Secrets have power. And that power diminishes when they are shared, so they are best kept and kept well. Sharing secrets, real secrets, important ones, with even one other person, will change them. Writing them down is worse, because who can tell how many eyes might see them inscribed on paper, no matter how careful you might be with it. So it’s really best to keep your secrets when you have them, for their own good, as well as yours.”
― Erin Morgenstern, The Night Circus

While Morgenstern’s passage wasn’t technically “advice for writers,” it sure seems like an indictment of anyone who might ever think to write something personal. With this advice, I do not agree.

The beauty of being a writer, in my opinion, is being able to take one’s existential life experience and filter it through fictional characters. Being able to share “secrets” and then fall back on the explanation that “it’s just a story” is a uniquely powerful position to hold.

And what a reader might think about my personal experience really doesn’t matter. What matters is that the reader comes away from a story with a better sense for place and experience and that he/she gained that “understanding” from reading my words. If I can accomplish that, then I have succeeded even despite ignoring the advice of others.