I’ve heard my children, especially my 12-year-old daughter, employ the word “awkward” on a regular basis. For the most part, she — along with her peers and her brothers — have used one of the three acceptable usages of “awkward” accurately, albeit in excess. The “use of word over time” line graph is current to 2010. I bet once the data is updated, there will be a sharp incline starting in September 2013 and climbing at a steady rate until June 2014. (That’s when my girl was in 5th grade where, at all times, everything was “awkward,” i.e., causing embarrassment.)

Two years later, I said the word. It came out without thought or reflection; it perfectly encapsulated the moment. But in the case of my use of the word “awkward,” I hit on all three shades of the adjective: 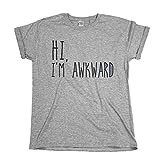 Scene: Indoor sports complex in the town east of ours; WASPy suburbia

Main Characters: Myself, my spouse, a peer couple who reside in the town east of the one where the sports complex is located. They were there waiting to watch their son play; we were leaving having seen ours play.

Rob and I have known this couple since 1996. (I met her in 1993, but it wasn’t until three years later that the four of us met and became fast friends. Rob and I were at their wedding; they were at ours. In the photos from our wedding reception, she was seated to my right for dinner.) Our children haven’t spent all that much time together, but ours have always enjoyed their time with theirs and reminisce fondly about the times our families have spent together.

So after a year and a half of not having seen them, despite several invitations from us to them (more accurately me to her) suggesting that our families get together — we’re only two towns away after all — her reaction was pretty “awkward,” i.e., not smooth or graceful, ungainly, when we bumped into each other yesterday afternoon.

She saw us first and said “hello.” I got the quick sense, by the stiffness in her body and the stilted tone of her voice, that she wished she’d simply kept her mouth shut and let us pass. We might not have even noticed they were there. She could have waited and let us go by, or let us say “hello” first. I think her “hello” was a knee-jerk reaction. Once it happened, we were forced into an interaction.

This interaction was “awkward,” i.e., causing embarrassment, to both of us. I think for her/them for having found explanation after excuse for why they couldn’t carve out an afternoon for their “friends” of close to two decades; I think for us for not having gotten the hint after the first few declined invitations and continuing to ask, in so many words, “Don’t you want to be friends with us?”

(The last time we’d been together all of the adults had way too much to drink. Maybe it was only me who got drunk, and now — in retrospect — I’m trying to explain away my own sloppy behavior by claiming I had co-conspirators. But as alcohol had always played a part in our time together — from the very beginning — I’m fairly sure that they were keeping pace with me.)

Rob and I couldn’t come up with anything definitive from that get-together in July 2014. Our children didn’t have a clear memory of the afternoon/evening. (They, unlike the adults, had not been drinking gin and tonics. But seeing as though it has been a very long time since we’ve seen them, I can understand their lack of recall.)

Ultimately, for me, the hard to deal with part is not knowing why there’s a gulf between us and not knowing how to ask. Should I take their “no thanks, we’re busy” replies on their face? Or should I take a hint and move on?

Walking away from the encounter, I said quietly over my shoulder “awkward,” thinking Rob was right behind me. He wasn’t. When I looked back for him, I saw he was just breaking from the hug he’d offered to the man/his “friend”/her husband.

When we were out of hearing range, I asked, “How’d that happen?”

Rob said he boldly interrupted the conversation his “friend” was having with someone and stepped up for the hug, which was reciprocated by the “friend.”

Rob said, “Because I’d like to think he’s the sort of person who’d like to have a friendship with me.”

Usually, I’m the optimist. Yesterday I was not; Rob was.

But today, part of me hopes I’ll hear from her either with an invitation or a pronouncement of their disinterest in having any more invitations extended to them.

Because having to say “we’re busy,” when they might prefer to say “leave us alone” can only lead to feeling “awkward.”

And that’s no way to feel.

Trust me. I know.