Anyone born in the mid 1960s-mid 1970s to a household with a TV and parents who liked to sleep in remembers Schoolhouse Rock. My sister and I would sit on the floor–despite the presence of a perfectly adequate couch–crane our necks up, and watch the familiar cartoon characters bounce up and down on elastic knees and sing out educational lyrics set to simple, upbeat melodies. I think the Schoolhouse Rock segments were placed in between the half-hour-long cartoon shows, serving as something of an interruption in public-service form. I enjoyed the breaks from Bugs and Elmer more than Bugs and Elmer themselves. 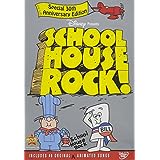 My sister liked the science and math ones. Me? I liked the history and grammar ones.

At thirty-two years old, I was required to take a semester of Constitutional Law as part of my education to earn my JD. It is without one shred of shame that I tell you my ability to recall the Preamble was thanks to Schoolhouse Rock. Two and a half decades had passed since those Sunday mornings. It didn’t matter: I heard the music in my head and the words flowed out onto the page.

Now close to four decades later, I am sitting writing this blog post. What comes to mind? “Three is the Magic Number.” As soon as I saw “3,000,” the funky guitar lead and deep baritone voice of the singer cued up in my mind.

I know that the original wasn’t “Three Thousand is the Magic Number.” That doesn’t make any sense on a broad scale. But after ninety-eight posts and 3,000 visitors, 3,000 IS a magic number. It’s a wonderful number.

Thank you for being part of the next 3,000. If you have some time today, search out Schoolhouse Rock–for a trip down memory lane or to show the next generation.

(Incidentally, before this post script, the word count had been 300. Coincidence? I think not.)

9 thoughts on “Three (Thousand) is the Magic Number”