These words were said about me a couple of years ago by a woman who I had once considered a close friend. As much as I think she said these words to assign all of the blame of our fractured friendship on me and somehow–in her mind–conclude that her shortcomings were relatively benign, she was right.

I have boundary issues.

When I heard that she had said those four words, I took them as she intended: an insult implying loose morals and a lack of tact. Additionally, while those words are an indictment of character, they are also something of a broad-brush generalization.

Now that some time has passed, I regard her intended criticism as nothing more than a descriptor, which when considered from a different angle, is a positive attribute.

I have boundary issues.

That fact has led me to do things which many would find too risky or too scary. That fact has driven a willingness to be authentic and forthright. That fact has resulted in my being vulnerable when others would build up defenses.

And I’ve been burned. Lots of times. I’ve “put myself out there” and “let my guard down.” I have trusted people and let them in, only to be disappointed, even betrayed. But in many instances, I made the first move. It was my opening salvo. It was my boundary-less attitude that got the conversation started.

I could opt to close myself off and be more self-protecting. I could permit her words of judgment to settle long enough to engender a change. I could try to be someone else.

But I have boundary issues, and I am proud of them. 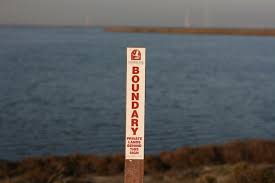 Because if and when the day comes that my manuscripts become publicly available, those who know me will wonder whether I have experienced all the things I have written about. Many will conclude that I have. I hope that those who read my words will–thanks to my lack of boundary issues (aka willingness to be raw and vulnerable)–think, “Wow, is that what it feels like to be that real?”

Because even though the characterization is supposed to come off as a curse, having boundary issues is, so far as I can tell, a gift.

6 thoughts on ““She Has Boundary Issues””