A while ago, I asked six people to read and critique a manuscript of mine. Some feedback has come in already. It varies widely which leads me to the only sensible conclusion possible: tastes differ.

This conclusion is of absolutely no help to me. How could it be? Person X loves a particular scene while Person Y hated it. There is no real objectivity in that which comes from a creative source.

The creative stuff? No such result.

You know this photo:

It has been seen by many as the image of the Great American Dust Bowl. In fact, were I to have asked you to call up in your mind a black and white photo you’ve seen about the dust bowl, I’d venture to guess this is what your memory would have presented.

And why this image? Did you know that a series of photos were taken of this woman and her children? Any one of them could have been put forth as the picture to capture the feel and tragedy of that time period.

So why that one?

Because someone decided that one was “the best.” Imagine though if someone else had been in the position to make that decision?

What if this had been the image we all came to know? 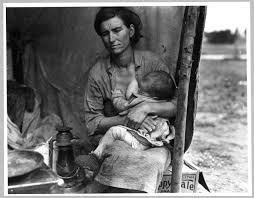 Would we have, as a culture had a different notion of breastfeeding had we all come to know this image? Would we have spent time hypothesizing on the writing on the side of the crate upon which she sat? Would we have understood,from this photo, that this woman was living in an open-air tent. Would we have concluded that she and her one child were victims of an environmental tragedy? Would we have even cared?

Did it matter more in the other image that you could see three children? What if the photographer had gotten all five of the “migrant mother’s” children to encircle her?

On that day, the photographer, Dorothea Lange took five photographs. ( You can see all five photos here.) Later, she had this to say about her experience:

I saw and approached the hungry and desperate mother, as if drawn by a magnet. . .  I did not ask her name or her history. . . . She said that they had been living on frozen vegetables from the surrounding fields, and birds that the children killed. . . . There she sat in that lean-to tent with her children huddled around her, and seemed to know that my pictures might help her, and so she helped me. There was a sort of equality about it. (From: Popular Photography, Feb. 1960).

Now I’m not sure how this migrant’s mother’s individual tragedy being documented by Ms. Lange ending up “helping” her out of her circumstances. And I cringed when I read Ms. Lange’s characterizing the exchange as being some sort of “equality.”  Those critiques of mine aside, I still am struck by the randomness that one image prevailed in our cultural memory while the other four faded into obscurity.

And herein lies the struggle that all creative efforts undergo: The subjective gaze and judgment made by others.

As I slowly edit, for the first time, the manuscript for The Olivia Express, I find myself making changes with the awareness that I may be doing so simply to please others. Those “others,” i.e., literary agents and publisher, being the ones in a position to label my work as credible, meaningful, and worthwhile–when in fact, it is all subjective.

Who knows if Ms. Lange wanted her photo of the migrant mother breastfeeding to be the one to be promulgated. If she did, and was told by “an other” that the now-famous photo would be the one published, I wonder if she was disappointed or whether she accepted her fame through the filter of someone else’s subjectivity.

10 thoughts on “Subjectivity in the Face of Choice”