My oldest child was seven and a half months old on 9/11/01. I remembering being at work, where I investigated child abuse and neglect 37.5 hours a week, and thinking that the world was coming to an end. Dramatic and fatalistic as that thought was, I can confidently look back now and see that I was wrong. The world was not coming to an end, it was ushering in a new age.

An age of violence and terror and hate. 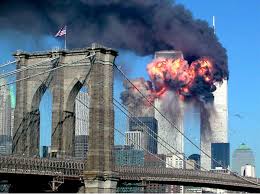 My 15 year old has never known a world–but more especially, an America–where an occurrence of a mass shooting or a suicide bombing comes at much of a surprise.

You know why? Because he has no memory of our country and our planet being anything other than violent, terrifying, and hateful.

Those of us who can draw a comparison usually do so with wringing hands and calls for ways to find the “bad guys” and “bring them to justice.” There is a lot of finger pointing by those who say that not enough is done by “those guys” to ensure “these senseless tragedies” won’t happen again.

Everyone with an opinion to share has someone to blame.

When the onus is assigned to someone else to fix the problem because “they” were the ones to get us into this mess, the blame assigners tend to step back, having decided that the problem is not theirs to remedy.

With everyone holding up mirrors to everyone else, it’s no wonder nothing has changed.

While 9/11/2001 was not the end of the world, it was end of my sense of comfort and safety here on American soil. The last fifteen years have shown me, time and time and time and time again, that what we are giving this generation of children a only a sense of mild fear and a great deal of complacency. The threat is always there, therefore the fear is merely mild; when the victim is someone else, it’s easy to say “oh that’s too bad,” and get right back to SnapChatting.

Since our upcoming generation has no pre-9/11/-2001 memory, they have come to define their world as filled with anger and violence and hate. Their lack of outrage is understandable: they’ve not known a world any different. Our lack of action–as those who can clearly recall life before the Twin Towers fell–is also, sadly, understandable: we’re so routinely exposed to these reports that we have developed “violence fatigue.”