Skip to content
Posted on June 17, 2016 by Jenna Brownson

I have an acquaintance. She’s not really a friend. We don’t know each other well enough to use that word. This is not to say that I wouldn’t want to be friends with her. I would, but there just hasn’t been a chance to begin a friendship.

For many adults, the people in their communities who they consider their friends are the parents of their children’s friends, classmates, or teammates. It makes sense: when your free time is spent watching your child play soccer, conversation is bound to start up with the other parents on the sideline.

This acquaintance and I met through soccer, but she and I never had sideline chats because I was across the field coaching my daughter and her child. Nevertheless, there’s a familiarity I have with her from this connection years ago. She’s affable and committed to being a thoughtful parent. I like her.

And I’m feeling sad for her because she’s fighting a battle.

Over the last many weeks–with her heart on her sleeve–she’s shared post after post on FB her observations on both the tragedies and frustrations of the larger world and her own struggles with navigating our shared community. Most of her focus has been on the unkind and aggressive treatment of her child by others. I don’t think she’s embellishing: her child is going through an unearned and unwelcome peer assault. This is weighing heavily on her heart.

We’re only acquaintances, though I can hear the pain and helplessness in her voice through her words. I can only imagine that her friends hear her desperation with more agony and more urgency. And I cannot even begin to visualize what challenges she faces in comforting her child.

Because as parents, we want to say, “It’ll get better.” Most of us do say that, and sometimes we actually believe it. But the power of positive thinking by any one of us does not change the behavior and cruelty of others. While the mere statement to one’s child of “This won’t last forever” is  factually true, many of us wonder whether the terminus will ever come. Anger and ignorance both have a remarkably long shelf life.

She is fighting a battle, and she is telling others what’s happening for her. Her friends are voicing their sympathizes and support. And I think she’s an anomaly: she’s not simply complaining; she’s being vulnerable in her disclosures.

There are lots of those people, too.

It’s important to remind ourselves that despite someone’s ability to appear well adjusted and functional, there are many who live with internal narratives of doubt and pain and daily struggles in an unkind world.

All we can do is be compassionate, even if we’re only acquaintances. 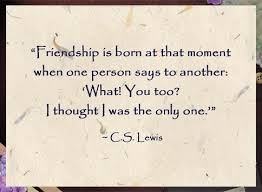 8 thoughts on “The Battle of the Other”