Yes, you know that taste. Most of us first experienced it as children as we suffered through a stomach bug. Saltines and ginger ale were the suggested remedy, and after a few days we were better.

As adults, we have the benefit of not sharing our daily space with two dozen under-the-weather peers on a regular basis. You’d think this would vastly decrease our odds of savoring vomit on the backs of our tongues. No such luck. In fact, being a grownup who has physical reactions to thought-provoking, i.e., troubling information, can mean you have that vomitty taste at least once a day.

Here are some things that will ensure you get your daily dose pukiness:

Listening to a political candidate promote his love for the “poorly educated” and more recently his praise for a “brutal strongman.”

Reading the reaction and subsequent mob mentality after after a boy fell into a zoo enclosure, another was pulled into a lake by an alligator, or a rapist was not really punished.

You need a strong stomach to learn what’s going on in the world. Yesterday evening, I received my “The Atlantic Daily” news. The email’s subject line read: “The Atlantic Daily: U.S. Police Shootings, Britain’s Next Leader, Baghdad Death Toll.”

Well, I was right on the same tired stories and managed to throw up a little in my mouth over what I predicted was going to be “neutral” when I read these words:

It’s a Girl: The next British prime minister and David Cameron’s successor set to be a woman after two female candidates prevailed in the latest round of voting in the Conservative Party’s leadership race. 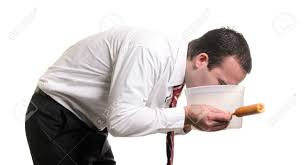 For those of us who have been on the receiving end of sexual harassment, sexual discrimination, or sexual assault, you can see the problem here. For those of you who believe that “the personal is political,” you can see the problem here. For the rest of you who think that it’s “no big deal” using the word “girl” to describe 53-year-old and 59-year-old women, you need to learn a thing or two about the meaningfulness of the subtleties of language in the perennial disempowerment of women.

For the record, I did something about this. Last night, I clicked on the “email us” link at the bottom of the page and wrote this:

Dear Editors,
I was more than disappointed to read “It’s a Girl” in reference to the next Prime Minister of the UK. Seriously?
In 2016, no publication should be referring to adult female humans–especially those poised to lead a country–as a “girl.”
Terrible, really terrible,
Jenna Brownson,
Card-carrying Woman for the last twenty-seven years having graduated from the status of “girl” at age eighteen

I’ve been assured–likely by some poorly-paid intern–that my comments will be forwarded to the editors. Upon my inquiry, I was also informed that it was unlikely I’d be hearing anything back from them as “everyone tends to be really busy.”

Yeah? Well, I am busy as well, and I took the time to let The Atlantic –a media outlet I have been reading for close to three decades–know my thoughts about its cringeworthy use of language.

If it got even one person to think–maybe that lowly intern–then I consider it worth my time and the silver lining to that vomitty taste.

Never, never, never doubt the value of speaking up.

This from yesterday’s “The Atlantic Daily:”

An Apology: We used an inappropriate headline in yesterday’s Daily to accompany our brief about the women campaigning to be Britain’s next prime minister. Thank you to those of you who called us out on it. We regret the error.