Skip to content
Posted on August 22, 2016 by Jenna Brownson

Every day I am expected to stand on one foot, hold the other one out in front of me by the big toe, and not fall over. The goal is to remain still during a the five-breath time frame as that is the duration of the pose. When I first started, I fell over. That clumsiness yielded to the occasional hopping so as not to have to put down the extended leg. Nowadays, I can stand like this without losing my balance: 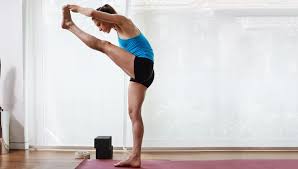 I have achieved “balance.”

(Oh for the ability to say that in every arena of one’s life. )

Over the last many months, I’ve been in a writer’s funk. Although I have a story in mind and 10K words already down, I know I have to put that aside.

After spending so, so many days writing, I have to balance those off with days dedicated to editing and honing followed by days marketing and pitching. If my ultimate goal is to have a “book on the shelf” at my local bookstore, I’ve got a lot of work to do–as a writer–not writing.

And while this prospect is wholly unattractive to me and the notion of “just writing” one more novel is far more appealing than the other chores associated with the business of writing, I have come to that tipping point of knowing that the “other” work needs to get done.

In my yoga practice, there are poses that I don’t “like.” The one pictured above had been in that category for a long time. Now that I have found some comfort in it, I no longer dread when it is time to perform it. Perhaps the same will be said about editing and marketing because–at this point–I really don’t think I can write another novel until I sell one of the ones I’ve already written. To do that, I’ll need to engage in a lot of “not writing.”

Not really what I envision when I became a “writer,” but life can bring challenges that were unplanned. And that’s ok.

(While in this phase, I will only blog on Mondays. I hope you’ll come by next week.)

One thought on “The Tipping Point”